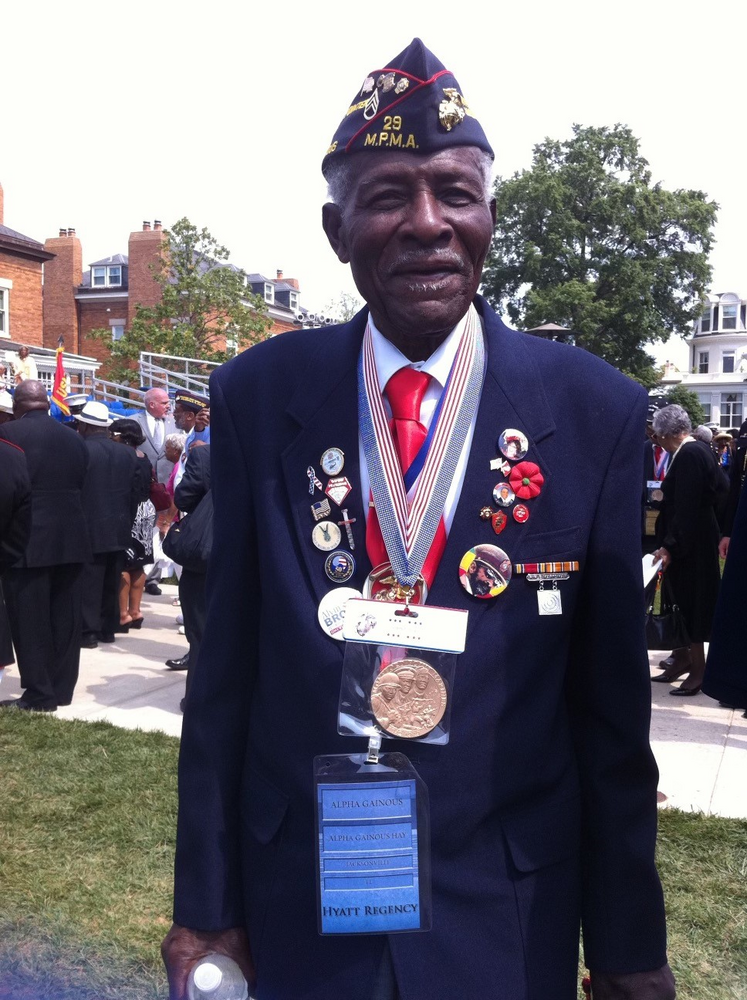 Please share a memory of Alpha to include in a keepsake book for family and friends.
View Tribute Book
Born to the proud parents of Lewis G. Gainous and Estelle G. Gainous on November 15, 1924, Alpha Preston Gainous was the youngest of three children; with Bessie Edwards being the eldest sibling and Ivory Dixon as the middle child. Having accepted the Lord as his Saviour at an early age, Brother Gainous attended the local schools in Duval County. Thereafter, armed with his faith in God and a favorite quote "the world don't owe me nothing," Brother Gainous set out to make his indelible mark in society. The first stop on this journey would be in June,1943, wherein he enlisted with the U.S. Marine Corp as one of the first black, rising to the position of Staff Sergeant, and finishing his military career in 1946. The next stop, now equipped with an arsenal of possibilities, Staff Sergeant set his sights on culinary servanthood. Therefore, he enrolled in Tuskegee University and was awarded a degree in Commercial Dietetics on August 12, 1949. Within this stop, gaining fulfillment of preparedness, Brother Gainous was fully persuaded that "God doesn't call the qualified but qualifies the called." Shortly after the completion of his academic endeavors, a miraculous door of opportunity was opened and Brother Gainous was blessed to become the Head Chef of a major restaurant in Columbus, GA. Here at this stop, at this junction in his life, Brother Gainous would learn "that things are not always what they appeared to be." It was not just an opportunity to use his degree as a Head Chef that brought him to Columbus, GA, but; more importantly, it was "for such a time as this" that the love of his life would cross his path. December 17, 1951, would be forever etched in the annals of time as Brother Gainous married his soulmate, Ethel Lee Jackson; who preceded him in death in 1986. From this God-ordained union was born one daughter, Alpha Gainous Hay; the apple of his eye, and great grandson, Brandon G. Quaintance; who preceded him in death in 2019. As with life's derailments Brother Gainous came to understand that some stops were for a season, some were for a reason and some were for eternity. Brother Gainous was the epitome of servanthood, with a goal "to serve this present age my calling to fulfill," so that the works I do speak for me." This servanthood entailed not just husbandhood to Ethel, fatherhood to Alpha, Estella, Meltonia and Jacqueline, nor; as a St. Paul AME member for over 50 years, shepherding with the Word of God to all that crossed his path. This servanthood extended outside the four walls into the community so much so that Brother Gainous' picture was displayed on the jumbotron at every Jaguar home game, he was the recipient of a Mayoral Proclamation as well as the Congressional Gold Medal. Although each stop on the journey was deemed commendable, Brother Ganious' ulterior motive was Roman 8:18 "For I reckon that the suffering of this present time are not worthy to be compared with the glory which shall be revealed in us." Brother Gainous understood that the "world don't owe me nothing" because only what you do for Christ will last. Therefore, Brother Gainous kept his eyes on God and "forgetting those things which were behind him" he pressed toward the mark of the prize of the high calling of God in Christ Jesus" because he knew that this train was bound for glory. With his sight set on glory; on Monday, April 11, 2022; after telling everyone that came into his presence, "I have had a good life," Brother Gainous boarded the train to glory to be absence from the body and present with the Lord. Cherishing his life are his loving daughter, Alpha Gainous Hay; niece's daughters Estella Dixon, Meltonia Osborne and Jacqueline Jackson; grandniece, Tonya Washington (Reginald); grandnephew, James Jackson; sister-in-law, Margaret Jackson; other daughters, Dineais Miller, Michele Cottrell, Diana Jenkins and Carolyn Hammer; sons, Ronald Jackson, Sr., Hallie Williams-Bey, Ronald Brooks and Bobby Miller; grandson, Ronald Jackson, Jr.; St. Paul AME Church family and sorrowing family, friends and community. VISTITATION 5:00 P. M.to 7:00 P.M. Friday, April 22, 2022 St Paul AME Church 6910 New Kings Road Jacksonville, Florida, United States
To send flowers to the family or plant a tree in memory of Alpha Gainous, please visit Tribute Store
Saturday
23
April

Look inside to read what others have shared
Family and friends are coming together online to create a special keepsake. Every memory left on the online obituary will be automatically included in this book.
View Tribute Book
Share Your Memory of
Alpha
Upload Your Memory View All Memories
Be the first to upload a memory!
Share A Memory
Send Flowers
Plant a Tree